Laugh out loud with Captain Underpants, from Dav Pilkey,
the creator of Dog Man!
Tippy Tinkletrousers is back in the ninth full colour
book in this #1 New York Times bestselling series.

George and Harold are behind bars for a crime they didn’t commit! But just as
they are settling into their new life, they are pulled from prison
by a time-travelling tyrant named Tippy
Tinkletrousers!

Now the boys are taking a trip back in time to the carefree days
of kindergarten, when the scariest thing they had to face was
not evil mad scientists or alien cafeteria
ladies but a sixth-grade bully named Kipper Krupp,
the nephew of their clueless school principal. And
because George and Harold don’t invent Captain Underpants until
they’re in fourth grade, the clever kindergarteners are on their
own.

Can they beat the bullies with brainpower instead of Wedgie
Power?

The books are now also available in full-colour graphic novels

Perfect for all children, but especially those who are struggling
to engage with reading

Full of fun and laughs (and toilet humour)! 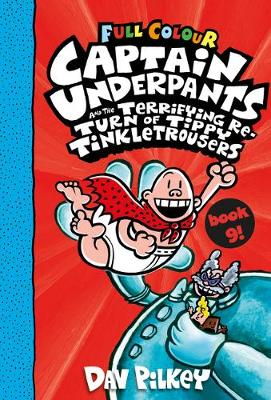