A Brief History of Ireland

From the dawn of history to the decline of the Celtic Tiger – how Ireland has been shaped over the centuries.

Ireland has been shaped by many things over the centuries: geography, war, the fight for liberty. A Brief History of Ireland is the perfect introduction to this exceptional place, its people and its culture.

Ireland has been home to successive groups of settlers – Celts, Vikings, Normans, Anglo-Scots, Huguenots. It has imported huge ideas, none bigger than Christianity which it then re-exported to Europe after the fall of the Roman Empire. In the Tudor era it became the first colony of the developing English Empire. Its fraught and sometimes brutal relationship with England has dominated its modern history. Killeen argues that religion was decisive in all this: Ireland remained substantially Catholic, setting it at odds with the larger island culturally, religiously and politically. But its own culture and identity have stayed strong, most obviously in literature with a magnificent tradition of writing from the Book of Kells to the modern masters: Joyce, Yeats, Beckett and Heaney. 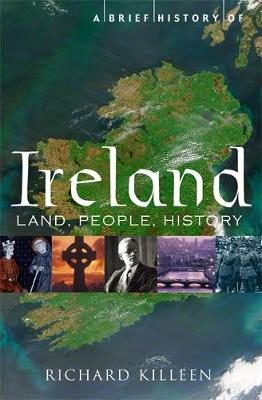