Zelensky: Ukraine’s President and His Country

Millions who have admired Volodymyr Zelensky’s defiance during Russia’s invasion of Ukraine will learn much from this up-to-date biography of the Ukrainian President. Zelensky’s life to date has been packed with drama and action.

By the age of 20, the Jewish boy from the provincial town of Kryvyi Rih had become a star of the stage.

At 30, he headed a multimillion-dollar TV company.

At 40, he took on Ukraine’s corrupt political and business elite in a TV drama where he played a history teacher who becomes President.

Then he launched a real-life political party named after the TV show, won a landslide victory and became Ukraine’s real President.

He said: ‘If I am elected, they will first sling mud at me. Then they will learn to respect me. And finally cry when I leave.’

Covering Zelensky’s background and bustling TV career through to his first, controversial years in office to Russia’s full-scale blitzkrieg, Zelensky is written by a long-standing Russia and Ukraine reporter and a Russian- and Ukrainian speaking researcher.

It’s a pithy biography of Zelensky for anyone who wants to understand Ukraine’s charismatic head of state, his complex country, and its vexed relationship with Russia.

Covering Zelensky’s life from his childhood to the Ukrainian presidency, Zelensky deals with: his background in a Russian-speaking region of Ukraine; his early career in TV taking part in KVN talent competitions; his rise through the Ukrainian and Russian television industry; and his breakthrough moment in the TV series Servant of the People playing a teacher, Vasyl Holoborodko, who dreams of reforming Ukraine and ending its corruption.

The show becomes a reality and Zelensky and his party, called Servant of the People, take power. Zelensky’s presidency is dogged by controversy concerning his attempts to curry favour with the US President Donald Trump and the offshoring of tens of millions of dollars (used to buy luxury property in London). Zelensky battles political rivals and takes on powerful vested interests in Europe’s second-largest country – before fighting a superpower in a fight most assume Ukraine will quickly lose (but they don’t).

Zelensky: Ukraine’s President and His Country is the first major biography of Ukraine’s leader written for a Western audience. Told with flair and authority, it is the gripping story of one of the most admired and inspirational leaders in the world.

STEVEN DERIX is a journalist at the prestigious Dutch newspaper NRC. Together with Dolf de Groot he wrote Blood Brothers: The Downfall of Team Rabobank, which uncovered Michael Boogerd’s doping fraud. From 2014 to 2020 he was NRC correspondent for Russia, Ukraine and Belarus.

MARINA SHELKUNOVA studied journalism and was a researcher and coordinator for NRC and De Standaard.

Vladimir Putin rarely underestimates his opponent. At the KGB Academy in Leningrad, he learned the meticulous art of profiling ‘targets’ of the service, whether they were Russian dissidents or East German Communist apparatchiks.

Before meeting with anybody, Putin first analyses their strengths and weaknesses. During his first visit to the United States, he wound President George W. Bush around his little finger, with pious tales of his christening in the Russian Orthodox Church. Afterwards, an obviously charmed Bush told of how he had looked into the ‘soul’ of the former KGB officer. When German Chancellor Angela Merkel visited Sochi in 2007 to discuss energy policy, Putin had his black labrador Konni brought in. Merkel – who is terrified of dogs – dared not budge an inch, and Putin dominated the conversation.

Vladimir Putin also carefully considers way he talks about people. The Russian President is only too aware of the political appeal of Alexey Navalny, and will therefore never allow the name of the opposition leader to cross his lips – not even since Navalny’s incarceration in January 2021. Putin’s spokesperson, Dmitri Peskov, consistently refers to Navalny as ‘that blogger.’

In April 2019, Volodymyr Zelensky was elected as the sixth President of Ukraine, with nearly three- quarters of the vote.
One month later, the Russian President attended the World Economic Forum in St. Petersburg. It had been five years since Russia’s annexation of Crimea but daily skirmishes between the Ukrainian army and pro-Russian separatists were still commonplace in eastern Ukraine.

‘Why did you not congratulate Volodymyr Zelenksy when he became President?’ asked the interviewer.

Putin breathed a heavy sigh. The Russian officials and business magnates in the room playfully nudged one another: this was going to be good.

‘You know,’ said Putin, ‘he is still pushing a certain rhetoric. He labels us “enemies” and “aggressors.” Perhaps he should think about what he really wants to achieve, what he wants to do.’

Putin had still not once uttered the name ‘Zelensky.’

‘You are the President of a world power,’ the interviewer fawned, ‘and right now, he is incredibly popular in his country. Both of you could start with a clean slate. Even a small gesture might completely change the course of world history. Why not simply arrange a meeting?’

Putin gave the enormous hall an almost pitying look, and waited until the sniggering from the officials and businesspeople had died down.

‘Nobody has invited me.’

‘Are you prepared to meet with him?’

Putin now looked genuinely amused. ‘Listen, I do not know this man. I hope that we can meet one day. As far as I can tell, he’s amazing at what he does, he’s a marvellous actor.’

Putin continued: ‘But seriously: it’s one thing to play a person, but quite another thing to be that person.’ 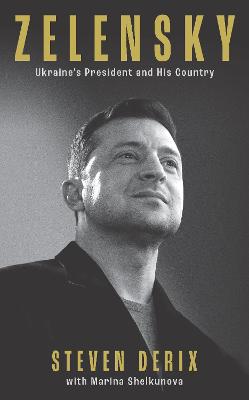