You Can’t Stop The Sun From Shining

Pre-order now: the extraordinary and revealing autobiography of one of rugby’s most entertaining and complicated figures
__________

Sonny Bill Williams is a once in a generation athlete – a player with immense sporting talent in rugby league, rugby union and boxing. In his remarkable career, he has won World Cups with the All Blacks in 2011 and 2015 and helped the Kiwis reach the 2013 final of the rugby league equivalent.

His athleticism has taken him from inner-city Auckland, where he grew up, to the highest sporting moments in Twickenham, Eden Park and Sydney’s Olympic Stadium. But there is so much more to Sonny Bill Williams’ life and journey than his on-field and in-the-ring triumphs.

In his book, we see a new side to SBW. A dedicated family man, someone who is devoted to his faith, committed to his teammates, respectful of his fans and aware that the path that Sonny Bill Williams has taken can inspire and empower others. We learn about the challenges of leaving home as a young man and dealing with a negative culture and the temptations that followed, and his courage in speaking out for the vulnerable and calling out injustice are all aspects of an inspiring life story.

Compelling and searingly honest, You Can’t Stop the Sun from Shining is essential reading for any sports fan. 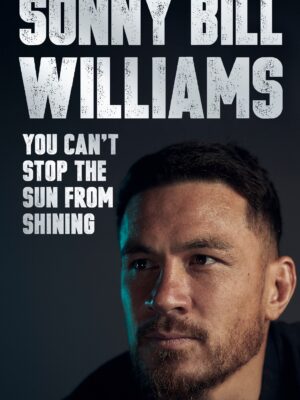