Yeah, But Where Are You Really From?: A story of overcoming the odds

‘It’s the ordinary life described in this book, and the extraordinary life inside that life, that make it such an engrossing, urgent, and entertaining read.  I couldn’t put it down.’

Marguerite Penrose’s is an extraordinary story of making a great life from complicated beginnings. Marguerite was born in a Dublin mother-and-baby home in 1974, the daughter of an Irish mother and a Zambian father. Severe scoliosis indicated a future of difficult medical procedures. She was a little girl who needed a break. And she got it at three when she was fostered – and later adopted – by a young couple, Mick and Noeline, and acquired a mam, dad, sister, Ciara, and loving extended family.

Growing up, Marguerite’s appearance was occasionally remarked on by strangers, but it wasn’t until her teens that she understood that her skin colour was a provocation for some. The progressive city that she knew was revealed to have an unpleasant undercurrent. So, she became an expert in shaping her life around anything that marked her out as ‘different’.

Marguerite’s story is one of facing some big questions – Who am I? How do I live in world made for people with bodies different to mine? Why does anyone care about my skin colour? – with intelligence, humour, courage and common-sense. She writes about coming to terms with the circumstances of her birth and, like so many in her position, looking for answers. About navigating the world as an active woman with a disability. About what it means to be both Irish and Black, particularly at a moment when the conversation is becoming mainstream in Ireland and she is thinking about it in new ways herself. Mostly, she writes about embracing life in a spirit of openness and positivity.

Yeah, But Where Are You Really From? is a captivating, wise and inspiring memoir by a truly remarkable woman. 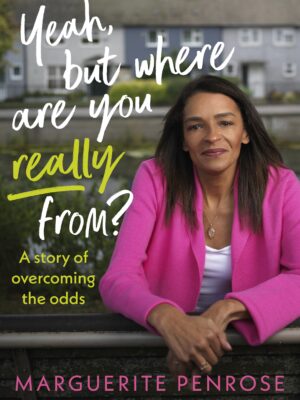