For over thirty years, David McDonald worked in Ireland’s biggest prisons. This is his story.
As a young officer, McDonald got a baptism of fire in Mountjoy. In 1989 it was a chaotic, pungent and overcrowded place, and the approach to keeping order was primitive.

Returning to his hometown two years later, he entered Portlaoise Prison, which – due to the presence of IRA and other subversive prisoners – was then the most secure prison in Europe. McDonald was amazed to discover the power of these subversives within the prison. Portlaoise, and later the new Midlands Prison, were also where Ireland’s emerging class of serious gangsters were housed. McDonald dealt with notorious household names like John Gilligan, Christy Kinahan, Brian Meehan, Dessie O’Hare and, more recently, killers like Graham Dwyer, in his average working day.

McDonald shares vivid accounts of the constant war of attrition between prisoners and prison authorities over the smuggling of contraband like drugs and phones. His work in a specialist security unit trying to stop this trafficking sometimes brought him into conflict with his bosses. He also questioned aspects of an often brutal and under-resourced system. Ultimately, concerns about poor handling of key issues led to him becoming a whistle-blower.

In Unlocked, McDonald brilliantly describes the boredom, the constant tension and flashpoints of extreme violence, and the moments of comedy, tragedy and surprising humanity that are part and parcel of working in prisons. Written with the help of award-winning journalist and author, Mick Clifford, it is a jaw-dropping and authentic account of life in the toughest of workplaces. 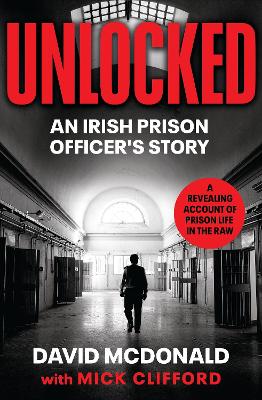