Two Hitlers and a Marilyn

‘I love this book. It is wise, funny, surprising, touching, and wonderful company.’ Jonathan Safran Foer

‘A comic and poignant memoir about growing up in the suburbs, fandom, stalking Ronnie Barker, and much more. A funny, moving read.’ Zadie Smith

‘At times hilarious, at others heartbreaking, Andrusier’s memoir provides a fascinating insight into obsession.’ John Boyne

“I’d managed to puncture a hole between our universe and the parallel one where all the celebrities lived.”

Adam Andrusier spent his childhood in pursuit of autographs. After writing to every famous person he could think of, from Frank Sinatra to Colonel Gaddafi, he soon jostled with the paparazzi at stage doors and came face-to-face with the most famous people on the planet.

For young Adam, autographs were a backstage pass to a world beyond his chaotic family home in Pinner, and his Holocaust-obsessed father. They provided a special connection to a world of glamour and significance lying just beyond his reach.

But as Adam turned from collector to dealer, learning how to spot a fake from the real deal, he discovered that in life, as in autographs, not everything is as it first appears. When your obsession is a search for the authentic, what happens when you discover fraudulence in your own family?

Two Hitlers and a Marilyn is both a hilarious and moving account of discovering that idols are mortals. It’s a story of growing up, forgiveness and discovering a place in the world.

‘Madcap and thoroughly engaging, Adam Andrusier’s vivid memoir brings to mind the early Philip Roth. This is a book of antic comedy that resonates and intrigues.’ Lisa Appignanesi

‘A fabulously interesting book and incredibly pleasurable to read. Very funny and strangely entrancing. It is about so much, but effortlessly.’ Adam Phillips

‘Adam Andrusier has created that rare thing: a memoir which delivers the coming-of-age but also reaches far beyond. The writing here about family is excellent, the characters and scenes memorable, but from the first they’re engaged also in a history. Two Hitlers and a Marilyn takes in the world as widely as possible, always searching for significance and connection.’ David Vann 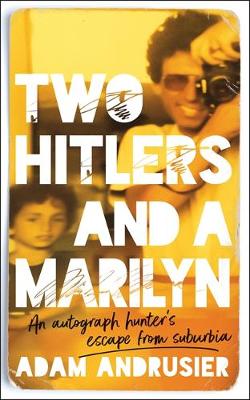