Tracing a Kidnapper
by Juno Rushdan

Her mission to rescue children brings a deadly threat

FBI agent Madeline Striker’s new case feels deeply personal. The kidnapped daughter of CEO Jackson Rhodes is the same age her sister was when she was abducted. Her fierce determination to rescue Jackson’s child forges a powerful bond. But they can’t divert their focus. A vindictive enemy is threatening the child’s life…

A past crime and a very present real danger

When Willa Tate shows Detective Kenneth Gray a buried box containing evidence of a crime committed over thirty years ago, he will leave no stone unturned to find answers. But when Kenneth uncovers a connection between this case and his wife’s unsolved murder he puts Willa’s in danger and closer to a killer desperate to silence the truth. 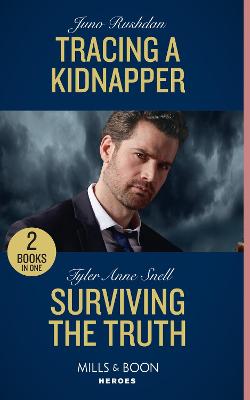 Tracing A Kidnapper / Surviving The Truth: Tracing a Kidnapper / Surviving the Truth (The Saving Kelby Creek Series) (Mills & Boon Heroes)
€3.00
This website uses cookies to improve your experience. We'll assume you're ok with this, but you can opt-out if you wish. ACCEPT Reject Read More
Privacy & Cookies Policy