‘Riveting and thrilling in equal measure. I didn’t come up for air until the very last page’ Patricia Gibney

‘Compelling and clever. They All Lied grips you from the opening page and doesn’t let you go’ Brian McGilloway

When Nadine Fitzmaurice, a manager in an insurance company, gets a distressed phone call from her eighteen-year-old daughter, Becca, telling her she’s killed someone, Nadine’s life is turned upside down.

Now Becca is being held against her will and, determined to save her daughter, Nadine finds herself dragged into the underworld of organised crime – and under the scrutiny of Detective Sergeant Wren Moore.

But the more Nadine gets sucked in by those holding Becca, elements of her past, and a ‘TRUTH or DARE’ game that went terribly wrong years before, come to the surface.
Eighteen years earlier, teenager Evie Nolan went missing. She never came home.
One day Becca was there, and now she is gone too.
But can Nadine help her daughter before it’s too late?

‘One of the most original and distinctive voices in Irish crime fiction.’ Jane Casey

‘Cleverly plotted and deftly woven, with surprises at every turn.’ Andrea Mara

‘From the opening psychological dilemma to the breathtaking denouement, They All Lied is Louise Phillips’ best yet’ Sharon Dempsey 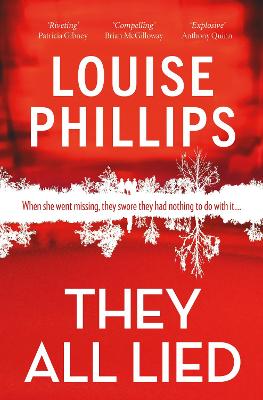