The Yank: My Life as a Former US Marine in the IRA

April 1975. A young Irish-American from New York is on a mission to enlist in an elite unit of the US Marine Corps. His goal: to receive the most intensive military training possible, and then move to Ireland to join the IRA and fight to end British occupation.
In this powerful and brutally honest memoir, John Crawley details the gruelling challenges of his Marine Corp boot camp; after moving to

Dublin to join the IRA Crawley, now known with the movement as ‘The Yank’, is sent to Boston to work with notorious American mobster James ‘Whitey’ Bulger to amass an illegal shipment of weapons. Ordered to return to Ireland with the arms, Crawley is then captured on the Marita Ann gun running trawler off the Kerry coast, imprisoned, and upon release became one of the masterminds behind an operation to knock out London’s electrical system.

Crawley is blisteringly candid about those he worked with, including fascinating portrayals of IRA leader Martin McGuinness, and of the psychopathic Whitey Bulger. Crawley is unflinching in his commentary on IRA leadership and their tactics, and through it all comes the steadfast voice of a man on a mission, providing an evocative and passionate account where that mission led him and why. To this day, he remains committed to the establishment of all-Ireland Republic. 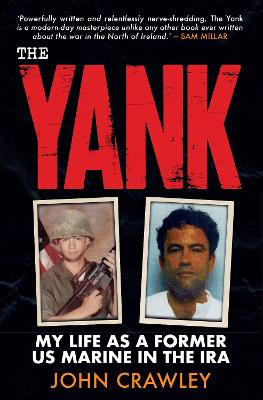