Titles in this set:

This collection brings together all eight books in Jill Murphy’s classic The Worst Witch series including the latest addition, First Prize for the Worst Witch.
The stories inspired the popular CBeebies adaptation and introduce Mildred Hubble and Miss Cackle’s Academy for Witches. Mildred is excited to be studying and training at the school but she’s not leaving the best impression. She keeps making mistakes like getting spells wrong and crashing her broomstick. Despite her clumsy ways, everything is going well and she’s enjoying the school but then she manages to turn Ethel, the teacher’s pet, into her deadly enemy…
Throughout these eight books, Mildred has to deal with arch-enemy Enid Nightshade; finds herself turned into a frog; and makes plans to ensure she will not be the worst witch in her class every single year… 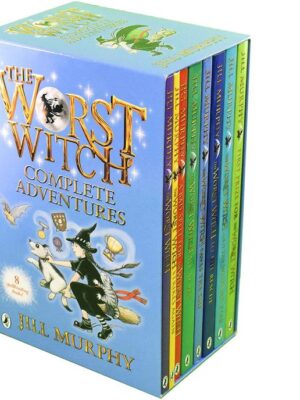