This stunning boxed set collects the three most popular books in the Unofficial Harry Potter Reference Library series – an incredible collection that digs deep into the lore of the Wizarding World. Inside you’ll find:

The Unofficial Ultimate Harry Potter Spellbook: Details more than 250 spells, charms, curses, hexes and jinxes in all, plus a catalog of enchanted objects.

The Unofficial Harry Potter Bestiary: Covers every monster, beast or creature that has ever appeared in any official Harry Potter book, film, or theatrical production, including more than 200 fascinating, magical creatures in all, with each entry providing details such as first appearance, location, disposition, physical appearance, attack abilities, defenses and intriguing story facts. 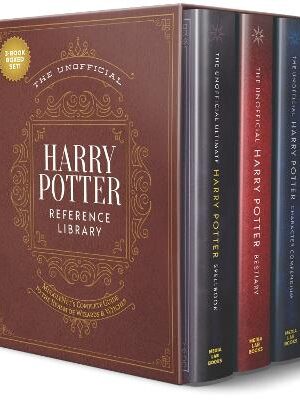 The Unofficial Harry Potter Reference Library Boxed Set: MuggleNet’s Complete Guide to the Realm of Wizards and Witches
€35.99
This website uses cookies to improve your experience. We'll assume you're ok with this, but you can opt-out if you wish. ACCEPT Reject Read More
Privacy & Cookies Policy