The Ref’s Call: Memoir of a Rugby Referee

In his new memoir, Irish Times columnist and former Test match referee, Owen Doyle gives us a behind the scenes glimpse into the high-pressured world of International Rugby Union.

From his early schoolboy dreams of playing for his country, to his decision to become a referee, to taking charge of the Five Nations, touring internationals and a World Cup, Doyle examines the good days and the bad, the famous and infamous occasions of his career, the hard choices and the fallouts from decisions he made through the years.

Written in his own inimitable style, Doyle charts the years following his retirement where he ran the referee department of the Irish Rugby Football Union and was involved in coaching the most successful generation of referees in its history, and he looks at the challenges facing modern rugby, particularly the issues of concussion and dementia, and the brutal collision style of play.
Covering over forty years of rugby, this is a uniquely told insider perspective of the great game. 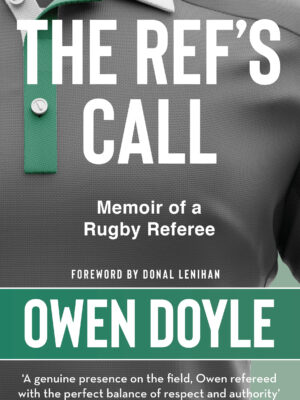