The Power of Five (5 Books Collection)

Best Selling Teen Series
The Power of Five Anthony Horowitz 5 Books Collection Set
Description
Raven’s Gate
Matt has always known he has unusual powers. Raised in foster care, he is sent to Yorkshire on a rehabilitation programme, only to find himself in the midst of sinister goings-on. Matt investigates and uncovers a terrible secret” eight guardians are protecting the world from the Old Ones, beings banished long ago by five children. But devil worshippers want to let the Old Ones back in…
Evil Star
After his experiences at Raven’s Gate, fourteen-year-old Matt Freeman thinks his days of battling evil are over. But he is pulled into another horrifying adventure when he discovers a second gate exists. Matt and his friend Richard travel to Peru and, assisted by a secret organization known as the Nexus, follow a series of clues to the gate’s whereabouts. But there is a traitor in the Nexus… Richard is kidnapped. Matt manages to escape with the help of Pablo, a local boy. The pair travel to the Nazca desert and Matt realizes the horrifying truth: the Nazca lines are the second gate” it is about to open. But, this time, will he have the strength to prevent it?
Night Rise
Nevada, USA. Fourteen-year-old twins Jamie and Scott Tyler are performing a mind-reading act in a dingy theatre. But when a sinister multinational corporation, Nightrise, kidnaps Scott, Jamie is left alone” and wanted for murder. He becomes embroiled in a corrupt presidential campaign and breaks into the American prison system before being propelled ten thousand years into the past, where he encounters the other Gatekeepers and witnesses the creation of Raven’s Gate” and the first fateful battle against the Old Ones.
Necropolis
Evil has been unleashed on the world and only five children “with special powers” can save it. Matt and the other three desperately need to find Scar, the final gatekeeper, who has been trapped in Hong Kong, where puddles of water turn into puddles of blood, where ghosts, demons and hideous creatures stalk the streets. Matt has no choice but to follow her. Now, both imprisoned, their only hope of survival is to reach a secret door in the Man Ho temple. But even if Scar can find her psychic power, it may already be too late.
Oblivion
Having escaped from Hong Kong, the five gatekeepers “Matt, Pedro, Scott, Jamie and Scarlett” are lost in a hostile and dangerous world. As they struggle to re-group and plan their next move, the malevolent King of the Old Ones gathers his forces in Oblivion: a desolate landscape where the last survivors of humanity must fight the ultimate battle. 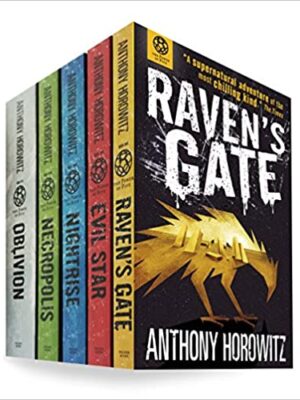