The Moderator: Inside Facebook’s Dirty Work in Ireland

As a Facebook moderator, Chris Gray made a living looking at graphically violent images and reviewing some of the internet’s most toxic debates. Following a short training induction, he was responsible for deciding what material could remain online and what needed to be removed. Years later, the psychological trauma of the things he had seen hit him like a ton of bricks. He was eventually diagnosed with PTSD.

In this eye-opening book, Chris recounts his quest to hold the behemoth Facebook to account for his PTSD – a journey that would ultimately lead him to take legal action against one of the world’s most powerful corporations.

The Moderator is both a story of the mental health fallout from this very new type of job and an exploration of some of the most important questions in the 21st century: when everybody has a direct communications channel with everybody else in the world, what should people be allowed to say, when is it okay to silence them – and who decides? 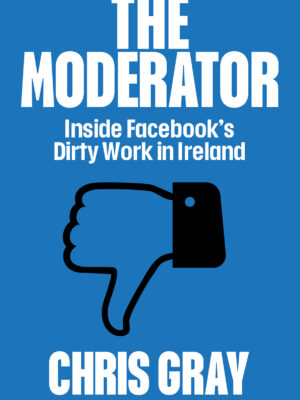