He has extorted. He has abused. He has raped. He has sacrificed colleagues as a means to reach the top. His name is Kim Sleizner – and he works as a police chief in Copenhagen.

Dunja Hougaard used to work for Sleizner. Then she left the police force, traumatised by what he put her through. Dunja is determined to get revenge on her former boss – no matter how untouchable he appears. Now she’s gone underground to investigate his past, and bring his crimes to the attention of the world.

When a high-ranking Danish intelligence officer and an unknown woman are found dead at the bottom of a lake outside Copenhagen, Dunja seizes her moment to set a trap for Sleizner. But then, just as it seems her case is solved, on the other side of the strait in Helsingborg, Sweden, detective Fabian Risk receives a message that changes everything…

Praise for The Final Nail:

‘This is a must for Scandinoir fans.’ Publishers Weekly
‘Stefan Ahnhem writes so damn well, it’s as simple as that.’ Katrine Engberg
‘Holds his readers in a vice-like grip.’ Jens Henrik Jensen
‘100% thrills guaranteed.’ Michael Katz Krefeld 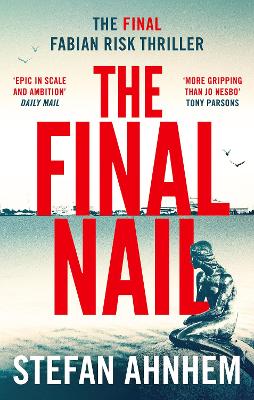