Half fairy tale and half historical account of a revolution that never was, Owen King’s The Curator is full of sly humor, sensuality, and strangeness – Holly Black

From Sunday Times bestselling author Owen King comes a Dickensian fantasy of illusion and charm where cats are revered as religious figures, thieves are noble, scholars are revolutionaries, and conjurers the most wonderful criminals.

At first glance, the world has not changed: the trams on the boulevards, the grand hotels, the cafes abuzz with conversation. The street kids still play on the two great bridges that divide the city, and the smart set still venture down to the Morgue Ship for an evening’s entertainment.

Yet it only takes a spark to ignite a revolution.

For young Dora, a maid at the university, the moment brings liberation. She finds herself walking out with one of the student radicals, Robert, free to investigate what her brother Ambrose may have seen at the Institute for Psykical Research before he died.

But it is another establishment that Dora is given to look after, The Museum of the Worker. This strange, forgotten edifice is occupied by waxwork tableaux of miners, nurses, shopkeepers and other disturbingly lifelike figures.

As the revolution and counter-revolution outside unleash forces of love, betrayal, magic and terrifying darkness, Dora’s search for the truth behind a mystery that she has long concealed will unravel a monstrous conspiracy and bring her to the very edge of worlds.

In The Curator, Owen King has created an extraordinary time and place – historical, fantastical, yet compellingly real, and a heroine who is courageous, curious and utterly memorable.

‘The Curator feels a little like Owen King somehow brought a curiosity cabinet to life. There are terrors here, but also marvels and delights, and a set of the most interesting characters I’ve met in some time. Put The Curator on the same shelf as other classics of the uncanny and uncategorisable, like Susanna Clarke’s Piranesi and Mervyn Peake’s Gormenghast. I loved it’ – Kelly Link

‘Owen King’s The Curator is a rich read. Language, characters, and a fascinating world combine to create an intensely satisfying experience’ – Charlaine Harris 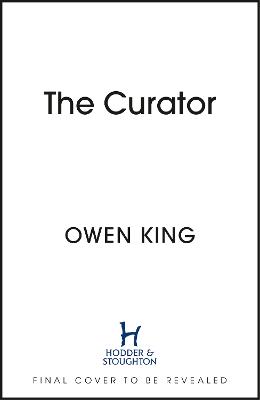