The boy’s body was so white it was almost transparent. But that’s not what caused the nausea to rise up her throat. He was so young. His body was unmarked, surrounded by a halo of plucked wildflowers.

One hot summer evening, eleven-year-old Mikey Driscoll is on the way home from playing with friends. Two days later, his body is discovered on a bed of wildflowers by some local teenagers.

The case is assigned to Detective Lottie Parker and this time it’s personal. The victim was a close friend of her son, Sean, from the run-down Munbally estate on the other side of town. Sean tells his mother Mikey was behaving normally before he died, but Lottie can’t help but feel that her son is keeping something from her…

Then days later, another boy is found dead, surrounded by wild flowers next to beautiful Ladystown Lake.

On the hunt for a twisted individual with a terrifying calling card, Lottie must uncover the web of secrets within Mikey’s circle of friends. Someone is hiding something but who are they protecting and can Lottie find out before it’s too late? Lottie is desperate to catch the killer before he strikes again because this time her own child could be in terrible danger…

If you love Helen Fields, Karin Slaughter and Rachel Abbott, you’ll love the latest heart-stopping thriller from Patricia Gibney. Tell Nobody will keep you guessing until the very last page.

What readers are saying about Tell Nobody:

‘BOOM Patricia Gibney does it again! WOW I just love the Lottie Parker series, I can’t get enough, I literally devour it, once I start the book, I just cannot put it down. Patricia Gibney has a way of pulling you in from page 1 and captivates you right through to the end…. Patricia Gibney has a way of keeping you on a cliffhanger, you won’t know the truth until she is good and ready and the build-up is seismic!… This will definitely not disappoint, for me IT’S A MUST MUST READ.’ Goodreads Reviewer, 5 stars

‘I am such a fan of the Lottie Parker series… This book did not disappoint. Hooked from the first chapter, I literally didn’t put it down until I was finished. Just as good or better than the first 4! I feel like I know these characters personally, Patricia Gibney is such a gifted writer. I can’t wait to see the next part of Lottie’s journey…….I will definitely be along for the ride!’ Goodreads Reviewer, 5 stars

‘OMG BEYOND BRILLIANT!!!! I started reading it on the first day of my holidays and had it read in less than a day!! It grips you right from the first page. It is so fast paced. Very sensitive subjects dealt with in a very tasteful way. It was anyone’s guess who was responsible right to the end. The action just kept on coming. I literally can’t wait for the next one. … A truly well deserved five stars.’ NetGalley Reviewer, 5 stars 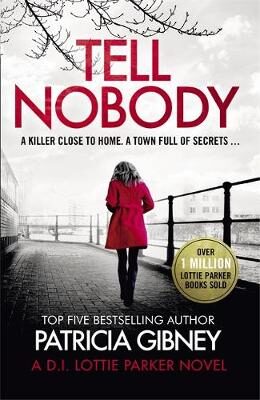