Take Your Breath Away

A missing woman. A husband suspected.
The truth will … Take Your Breath Away
Linwood Barclay is…

‘A suspense master’ Stephen King
‘In a class of his own’ T.M. Logan
‘One of the finest thriller writers in the world’ Mark Billingham

It’s always the husband, isn’t it?

When his wife Brie vanishes from their home one night, never to be seen again, people assume Andy got away with murder. The police can’t build a case against him, but still his friends and neighbours abandon him.

Six years later, Andy’s life is back on track, and he’s settled with a new girlfriend. And when he hears his old house has been bulldozed and rebuilt, he’s not bothered. Things are good.

But then one day, a woman who looks like Brie shows up at their old address, screaming ‘Where’s my house? What happened to my house?’ before vanishing as quickly as she appeared.

And as dark suspicions resurface, Andy’s future depends on discovering what the hell is going on. The trick is staying alive long enough to find out…

‘A full-throttle powerhouse of a thriller – Linwood Barclay is in a class of his own’ T.M. LOGAN

‘One of the finest thriller writers in the world’ MARK BILLINGHAM

‘The twists keep coming’ THE TIMES

‘Another lightning-paced page-turner with a twist that really did take my breath away. Absolutely classic Linwood’ MARK EDWARDS

‘If you want someone to jangle your nerves and mess with your mind, Barclay’s your man’ SAGA

‘A fast-moving, high-concept thriller from the talented Barclay … a rip-roaring rollercoaster of a ride’ DAILY MAIL 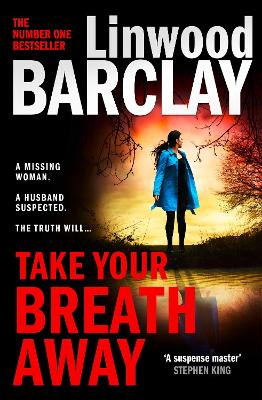