Shot Through the Heart
by Nicole Helm

She’s not the trusting type…

Willa Zimmerman grew up as the daughter of spies, so she’s always known her life could be in danger. That’s why, when North Star undercover operative Holden Parker follows her to her home, seeking a lead on a hit man, she captures him. But soon they learn they’re actually on the same side-and they’re being pursued by the same relentless foe. Together, can they stop a deadly hunter before they end up as the next victims?

Colton 911: Guardian in the Storm
by Carla Cassidy

A murder broke her heart. Can he heal it?

While she mourns her father’s death, psychology professor Simone Colton is determined to profile his killer. Special Agent Brad Howard wants her to stay away from the case, but an attack on her life convinces him that he needs to keep her close. Hidden away in a secluded cabin, Simone and Brad must confront the desire between them-and the storm raging outside. Can they survive a murderer’s lethal threats? 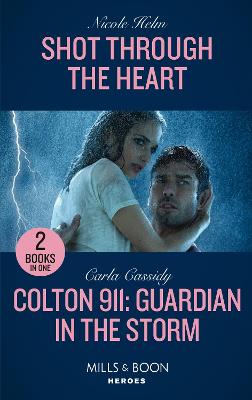