‘Another grand slam for the master storyteller’ DAVID BALDACCI

THE CITY OF ANGELS
Adele Schumacher isn’t a typical worried mum. When she hires Elvis to find her missing son, a controversial podcaster named Josh Shoe, she brings a bag filled with cash, paranoid tales of government conspiracies, and a squad of mysterious bodyguards. Finding Josh should be simple, but Elvis quickly learns he isn’t alone in the hunt – a team of deadly strangers are determined to find Josh first.

THE CITY OF LIES
With dangerous secrets lurking behind every lead, Elvis needs his friend Joe Pike more than ever to uncover the truth about Josh, corrupt politicians, and the murderous business cartels rotting the heart of Los Angeles. And when his estranged ex-girlfriend Lucy Chenier and her son return to the city, Elvis realizes just how much he has to lose . . . if he survives.

Written with the heart, humour, and relentless suspense for which Crais is famous, Racing the Light delivers Elvis Cole’s most dangerous case yet. 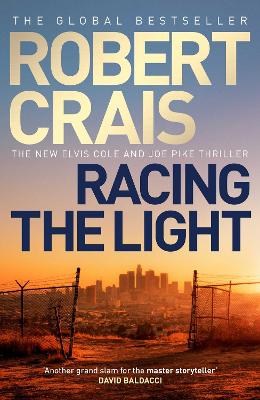