Pirate Ship: Lift the Flaps to Follow the Clues-Board Book

The crew of the Black Spot have dropped anchor by a small island, to celebrate Captain Blackbeard’s birthday. But the Captain’s parrot spots someone hiding in the bushes. Move the leaves aside to see their old enemy, Pirate Pete – and he’s clutching a treasure map! The crew set sail for Treasure Island, while Pete is locked up in the smelly hold. Is there anything useful in that old trunk? Raise the lid and see! Out on deck, Captain Blackbeard peers through his telescope, searching for Treasure Island. Lift the lens cap and you can look, too! Instead he spots an enemy vessel. Oh, no! It’s Captain Cut-throat and his crew, and they’re after the treasure as well! Following a pitched sea battle, see who gets their hands on the chest brimming with gold and jewels…All in all, this novelty board book is a pirate hoard worth treasuring – arrrhhhh! 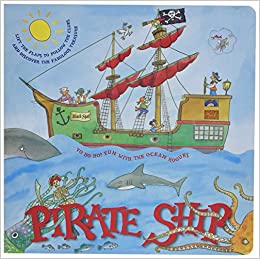