The new incredible domestic thriller from the Sunday Times Number One bestselling author of sensational books like Both Of You…
One Last Secret … would you kill to keep it?

A week at a beautiful chateau in the south of France – it should be a straightforward final job for Dora. She’s a smart, stunning and discreet escort and Daniel has paid for her services before. This time, all she has to do is convince the assembled guests that she is his girlfriend. Dora is used to playing roles and being whatever men want her to be. It’s all about putting on a front.

It will be a last, luxurious look at how the other half lives, before Dora turns her back on the escort world and all its dangers. She has found someone she loves and trusts. With him, she can escape the life she’s trapped in. But when Dora arrives at the chateau it quickly becomes obvious that nothing is what it seems…

Dora finds herself face to face with a man she has never forgotten, the one man who really knows her. And as old secrets surface, it becomes terrifyingly apparent that one last secret could cost Dora her life…

From the Sunday Times Number One bestseller Adele Parks comes a blisteringly provocative novel about power, sex, money and revenge.

Praise for One Last Secret:

‘I’ll drop anything for a new Adele Parks: she nails it ever time’ Lucy Foley

‘Adele Parks is the queen of the domestic drama’ Sally Hepworth

‘Adele is on fire with One Last Secret. Deliciously deceptive and darkly satisfying. I loved it’ Jane Fallon

‘Adele Parks goes fearlessly into worlds which others might balk at. She pulls it off every time. One Last Secret opened my eyes’ Jane Corry 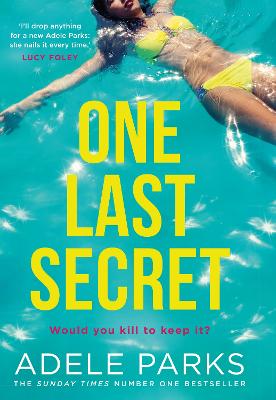