Nanny, Ma and me: An Irish story of family, race and home

Jade Jordan’s grandmother, Kathleen, left Ireland for England in the late 1950s to train as a nurse. While there, she fell in love and married a Jamaican man. They had two sons and a daughter Dominique and settled in London’s diverse and multi-cultural Walthamstow. But when Kathleen decided to return home to Dublin, she discovered that the colour of her children’s skin set them apart — and that their new lives in Ireland would be very different to the ones they had known.

Here, in this honest, warm-hearted and often humorous multi-generational memoir, Kathleen, Dominique and her daughter Jade each tell their story.

From Kathleen’s determination to raise her children with love and security in inner-city Dublin, to Dominique’s struggle to figure out how she fit in as a young Black teenager, to Jade’s own experiences as a Black woman growing up in twenty-first century Ireland, Nanny, Ma and me is a story about race, an account of a country of contradictions which at its heart lies a tale of the power of community and love and three women who put family first. 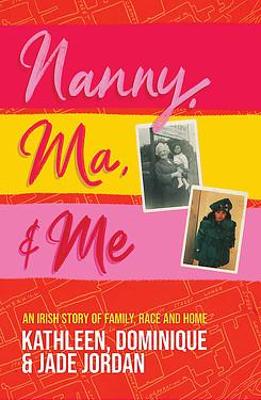