‘These diaries are like their author – fabulously entertaining, impossibly glamorous, and utterly irresistible’ Piers Morgan

‘What a treat to delve into Joan Collins’ diaries; a treat from start to finish’ Elizabeth Hurley

These are Dame Joan Collins’ ‘uncensored diaries’. Often outrageous, the entries were almost written entirely in real time. Most were done within ten hours of the events Joan describes, and many are hilarious. Whether it is an encounter with a member of the Royal Family, or her keen and honest insights of other celebrities at parties or dinners, Joan doesn’t care. She’s Unapologetic!

The diaries are intimate and funny, as readers of her column for the Spectator will recognise. It has been eight years since Joan’s last non-fiction book, and what could be more fun than opening her diaries, which are as scandalous as Andy Warhol’s, and pull no punches – for example, on Donald Trump: “That ungallant schmuck has written something horrible about me in the New York Post saying: ‘The last thing I would want to do in real life or on television is to be your lover.’ What a gentleman!”

‘As brutal, withering and funny as you’d expect’ Julian Clary 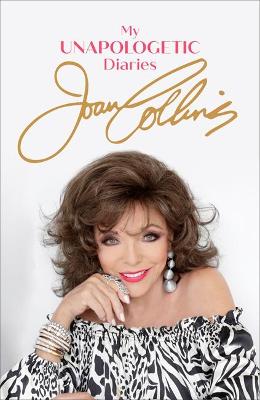