In September 2019, a bishop at the Knock Shrine officially declared that 30 years
earlier a seriously ill woman was ‘healed’ during her pilgrimage to Knock. This was
a landmark moment: the first time the Catholic Church has acknowledged the
curing of a pilgrim at this shrine. That woman was Marion Carroll and her healing is
internationally recognised as something that ‘defies medical explanation’.

On her day of amazing grace in 1989, Marion, from Athlone, Co Westmeath, was in her
late 30s and facing a bleak future. A wheelchair user, she was incontinent, blind in one
eye, partially sighted in the other – and mother to two young children. She describes
herself as an ‘invalid’ with ‘wasted’ muscles and ‘severely affected’ speech caused by a
long-standing, debilitating illness diagnosed as MS.

But after attending the Anointing of the Sick and receiving a blessing, Marion was
able to step, pain-free, from her stretcher and walk again – a life-changing, ‘beautiful,
magnificent feeling’ which conventional medical wisdom is unable to account for.

When Marion set off on her journey as a pilgrim, she was praying not for recovery, but
that God would look after her husband and children when she died. Now she has five
grandchildren of her own. Her first instincts after she found herself able to walk, talk
and see perfectly at Knock was to ‘laugh it off’, so incredible was the transformation.
And in the years that followed, she waited until September 2019 for the Catholic
Church to officially recognise her cure.

Here for the first time, with humour and grace, Marion tells the incredible, moving
story of her life and that of her family before and after her miracle cure.

‘In a world filled with bad news Marion Carroll’s story gives hope and
inspiration to us all.’ BISHOP CHRISTY JONES

‘The Church formally acknowledges that Marion’s healing does not exist of
any medical explanation.’ ARCHBISHOP MICHAEL NEARY

‘Marion is a chosen instrument of God and Our Lady to communicate at
home and abroad.’ MONSIGNOR JOSEPH QUINN 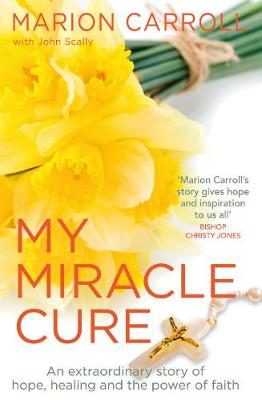