Middle School: Dog’s Best Friend
It’s a dog-eat-dog world, and Rafe Khatchadorian is just trying to live in it. Life in middle school is finally starting to seem bearable – until Rafe spots his grandmother standing in the free-meal line at the local soup kitchen.
Just My Rotten Luck
In this seventh Middle School episode, Rafe heads back to the place his misadventures began: the dreaded Hills Village Middle School, where he’s now being forced to take ‘special’ classes…
Middle School: Save Rafe
After a rough summer, Rafe is heading back to the dreaded Hills Village Middle School, the site of the very worst years of his life.
How I Survived Bullies, Broccoli, and Snake Hill
Rafe Khatchadorian, the hero of the bestselling Middle School series, is ready for a fun summer at camp – until he finds out it’s a summer school camp!
My Brother Is a Big, Fat Liar
Georgia Khatchadorian plans to excel at Hills Village Middle School in all the places her troublemaking brother failed.She’s even bet him that she’ll quickly become one of the most popular girls in school.
Middle School Get Me Out of Here
After sixth grade, the very worst year of his life, Rafe Khatchadorian thinks he has it made in seventh grade. He’s been accepted to art school in the big city and imagines a math-and-history-free fun zone.
The Worst Years of My Life
Rafe Khatchadorian has enough problems at home without throwing his first year of middle school into the mix. Luckily, he’s got an ace plan for the best year ever, if he can pull it off.

Called in to pick up fabulous books first thing this morning in Waterford and long awaited stationary. Went in to pick up three books and came home with six 😊

when will nutgrove open pls?

Yessssssss! I'm so excited from Waterford.🤓

Have missed the great staff in bookstation Carlow 🤗

When will Blackrock be opened.?

When will tallaght store be opened

‘A wonderful work of art and a wonderful window into the human heart’ Richard Curtis
The Boy, The Mole, The Fox and The Horse from Charlie Mackesy. Buy it here for just €17.99 bit.ly/2LZRuzi ... See MoreSee Less

I was recently gifted this book. It is so amazing Sophie Lodge 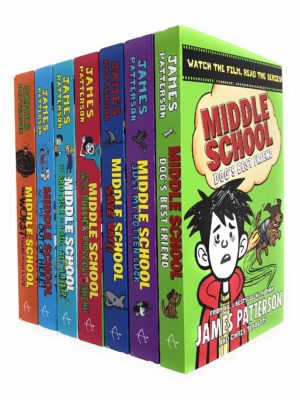