Life in Ireland: A Short History of a Long Time

This is the story of life in Ireland – a story half a billion years in the making.

With its castles, crannogs and passage tombs, Ireland is a land where history looms large, but the saga of life on this island dates back millions of years before the first people set foot here.

In Life in Ireland, Conor O’Brien guides the reader on a journey around the island to explore the history of natural life here, from the Jurassic Coast of Antrim to the great Ice Age bone-beds of Cork. Along the way, we’ll meet some of the astonishing creatures to have called Ireland home through the ages: shelled monsters; huge marine lizards; armoured dinosaurs; giant deer; mighty mammoths. Vital strands in the story of life on Earth have left their mark here, including some of the first creatures to crawl onto land or take to the wing.

This epic journey will take us from the first fossils to the present day, to see how our wildlife has adapted to the human age and explore what the future might hold for life in Ireland.

Part I: From the Dawn to the Dinosaurs
The First Life in Ireland
Footprints in Stone: The Tracks of Valentia Island
Sharks, Shells and Swamp Monsters: Carboniferous Ireland
Dinosaurs: The Reign of the Reptiles
The Sea Dragons of Ulster

Part III: Life in the Human Age
The Coming of Man
To a Forest Primeval: Ireland’s Lost Woodlands
Hidden Oases: Ireland’s Bogs and Uplands
Life in the Grass: The Fauna of Ireland’s Farms
Ireland’s Urban Wildlife
In the Heart of the Sea: The Life in Ireland’s Oceans
The Tragedy of the Great Auk
Rewilding Ireland

A New Frontier
Bringing Back the Ice Age Mega-Beasts 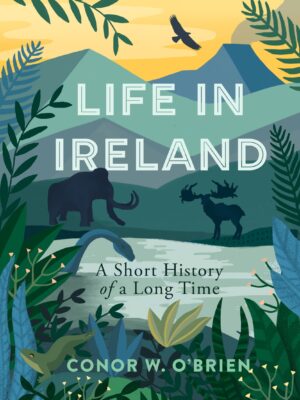