Dog Man meets the Lord of the Rings in this epic laugh-out-loud graphic novel series about two aspiring monster slayers. In their second adventure, our heroes face a new threat to Meowminster – an army of ferocious sea monsters! This is the perfect new read for fans of Captain Underpants, Dog Man and The Simpsons!

The islands of Pawdor are in peril once again! Ferocious sea monsters have been spotted on shore, and the townsfolk are in a complete panic. Luckily, Kitty Quest are ready to protect the land. So what if Woolfrik and Perigold are the only guild members (besides their mentor who’s a ghost), and it’s just their second week on the job?

How are these two amateur heroes supposed to stop a whole army of tentacled beasts? It may just take some quick thinking, a whole lot of luck, and a little help from the most unexpected of places. In order to save all of kitty-kind, Woolfrik and Perigold are going to have to learn to work together and prove that two heads are better than one.

Praise for Kitty Quest:
‘Fantastically funny and epically exciting! Kitty Quest is a ridiculous thrill from start to finish!’ – Jamie Smart, creator of the Bunny vs. Monkey series

‘So funny! Phil Corbett is a genius!’ – Rob Biddulph, author of Draw With Rob

‘Fun, fast-paced and hilarious. Kitty Quest is a must-read – especially if you love a good cat-pun!’ – Laura Ellen Anderson, author of Amelia Fang

Matt Braly, creator of Disney’s Amphibia, proclaims Kitty Quest is ‘an absolutely charming story that had me chuckling the whole way through. I couldn’t put it down!’

‘A hilarious, magical and downright silly story about some paws-itively delightful heroes! Kitty Quest is the purr-fect tale for any reader!’ – Brett Bean, creator of the Zoo Patrol Squad series 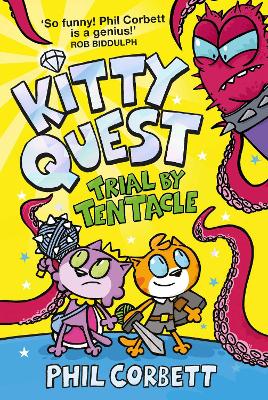