Fear
This is a blood-pumping, white-knuckle sci-fi thriller of epic proportions. Night is falling in the FAYZ. Even though it’s been nearly a year since everyone over the age of fifteen disappeared, the sun has continued to shine on the kids of Perdido Beach. Now, though, the gaiaphage has blotted out the sun and plunged the FAYZ into perpetual gloom. Divided and dispirited, the survivors face their greatest enemy yet – the darkness of their own minds…
Plague
This is a blood-pumping, white-knuckle sci-fi thriller of epic proportions. The FAYZ goes from bad to worse…The darkness has been foiled once again and the resurrected Drake has been contained. But the streets of Perdido Beach are far from safe, with a growing army of mutants fighting against the humans for power in the town. In a small room of a house near the edge of town, Little Pete lies ill on a bed. In his fevered dreams, he continues his battle with the hidden evil that seeks to use his power to bring about anarchy and destruction.
Lies
It happens in one night: a girl who died now walks among the living, Zil and the Human Crew set fire to Perdido Beach, and amid the flames and smoke, Sam sees the figure of the boy he fears the most – Drake. But Sam and Caine defeated him along with the Darkness – or so they thought. As Perdido Beach burns, battles rage: Astrid against the Town Council; the Human Crew versus the mutants; and, Sam against Drake. And the prophetess Orsay and her companion, Nerezza, are preaching that death will set them all free. As life in the FAYZ becomes more desperate, no one knows who they can trust.
Hunger
It’s been three months since all the adults disappeared. Gone. food ran out weeks ago and starvation is imminent. Meanwhile, the normal teens have grown resentful of the kids with powers. And when an unthinkable tragedy occurs, chaos descends upon the town. There is no longer right and wrong. Each kid is out for himself and even the good ones turn murderous. But a larger problem looms. The Darkness, a sinister creature that has lived buried deep in the hills, begins calling to some of the teens in the FAYZ. Calling to them, guiding them, manipulating them. The Darkness has awakened. And it is hungry.
Gone
Suddenly there are no adults, no answers. What would you do? In the blink of an eye, the world changes. The adults vanish without a trace, and those left must do all they can to survive. But everyone’s idea of survival is different. Some look after themselves, some look after others, and some will do anything for power…Even kill. For Sam and Astrid, it is a race against time as they try to solve the questions that now dominate their lives…What is the mysterious wall that has encircled the town of Perdido Beach and trapped everyone within? Why have some kids developed strange powers? And can they defeat Caine and his gang of bullies before they turn fifteen and disappear too? It isn’t until the world collapses around you that you find out what kind of person you really are. This book offers a chilling portrayal of a world with no rules. When life as you know it ends at 15, everything changes.
Light
The sixth and final heart-stopping installment in the bestselling GONE series. An exceptional page-turner. Escapism just doesn’t get better than this. All eyes are on Perdido Beach. The barrier wall is now as clear as glass and life in the FAYZ is visible for the entire outside world to see. Life inside the dome remains a constant battle and the Darkness, away from watchful eyes, grows and grows …The society that Sam and Astrid has struggled so hard to build is about to be shattered for good. It’s the end of the FAYZ. But who will survive to see the light of day? 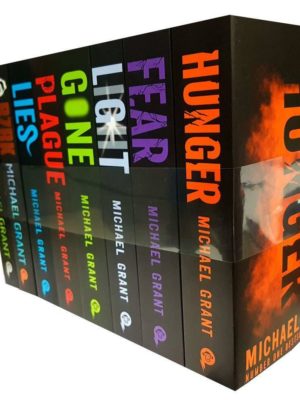