Girls Who Slay Monsters: Daring Deeds of the Irish Goddesses

Have you heard of Eithne the supernatural scholar or Fand the shape-shifting eco-warrior?

What about Be Mannair, a gender-fluid spy who challenges an entire army, or Be Binn, a giantess who gets her own back on her bullies?

From mermaids and fashionistas to athletes and farmers, meet goddesses of all shapes and sizes from Ireland’s ancient myths. Stand by their sides as they wield magic, fight monsters, and protect the powerless – and you might discover that you, too, are a force of nature.

Note From The Author

While many of us grew up learning about Greek and Norse myth, the Irish goddesses were an undiscovered secret. At my convent school, I was taught about two or three magical women from mysterious lands, but they were not described as goddesses, and I had no idea how warped these tales had become.

Then years later, I took a trip to Rathcroghan, an Irish archaeological site known as the ancient capital of Connacht, and the original home of Halloween. I learned the land there was linked with powerful goddesses like Morrigan – whose name I barely knew – and Medb, described in my schoolbooks as a greedy mortal, no more than a villain in a man’s story.

I couldn’t understand why I hadn’t been taught about these goddesses and felt something had been stolen from me. So, for many years after, I went digging through ancient Celtic texts and discovered a pantheon of exciting goddesses with brilliant abilities. But what I found most remarkable was that these women from thousands of years ago often faced the kind of challenges we experience today. Their stories are relevant and inspiring, yet girls everywhere have been stripped of the Celtic goddesses – an important part of our shared female heritage.
I am grateful and honoured to retell their stories for you now. 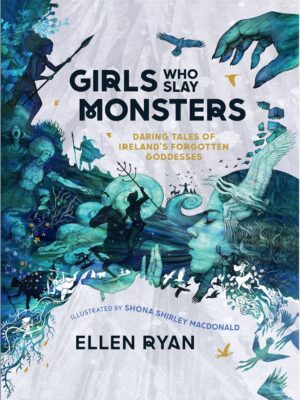