Dying of Politeness: A Memoir

‘Something’s crossed over in me and I can’t go back,’ says Geena Davis’s Thelma to Susan Sarandon’s Louise. The path to empowerment never did run smooth …

From two-time Academy Award winner and screen icon Geena Davis, Dying of Politeness is the candid, surprising tale of her journey from her epically polite childhood to the roles that put her in the spotlight and gave her the strength to become a powerhouse in Hollywood.

At three years old, Geena announced she was going to be in movies. Now, with a slew of iconic roles and awards under her belt, she has surpassed her childhood dream, but her journey has been one of fits and starts, with a pothole or two along the way.

In this hilarious memoir, Geena regales us with tales of a career playing everything from an amnesiac assassin to the parent of a rodent in Stuart Little; a soap star in her underwear to a housewife turned road warrior in Thelma & Louise; a baseball phenomenon in A League of Their Own to the first female President of the United States in Commander in Chief, and more. She is frank about her eccentric childhood; her many relationships, including her spontaneous Las Vegas wedding to Jeff Goldblum; her archery exploits which led her to the Olympic trials; and how she became a tireless advocate for women and girls, founding her own institute which engages film and TV creators to better represent women and actors from diverse backgrounds.

Dying of Politeness is a touching account of one woman’s journey to fight for herself, and ultimately fighting for women all around the globe. 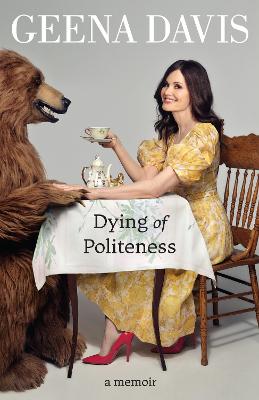