The perfect balance of wry humour and pathos, Duffy and Son is a funny and heartwarming novel about family ties and finding romance.

Eugene is turning 70; his son Jim is turning 40. They’ve been living together in good-natured bachelor harmony all this time, but something has got to give.

Eugene Duffy spent his life running a little hardware shop in a small town. It was a quiet existence, even before he retired. The only drama was generated by his wife, Una, who saw their marriage vows as something more akin to a serving suggestion. After having multiple affairs, she finally walked out on him almost twenty-five years ago, leaving him to look after two moody teenagers alone.

Those moody teenagers are moody grown-ups now. Eleanor is married and lives in Dublin. Jim is very much single and still lives at home. He’s hasn’t had a girlfriend in years and doesn’t seem interested in acquiring one.

Both father and son have birthdays coming up – Eugene’s 70th and Jim’s 40th. As the milestones approach, Eugene decides it’s time for drastic measures and throws himself into the task of finding his son a wife.

But Jim isn’t the one who needs help. Eugene is. Turning 70 is having a funny effect on him. And that’s before Una shows up out of the blue, bearing news …

Duffy and Son is a comedy about a family struggling with its past and trying to find a future.

Reminiscent of Fredrik Backman’s bestselling novel A Man Called Ove, Duffy and Son contains a likeable but curmudgeonly main character, wry humour, tremendous heart, as well as a strong sense of community. It is a funny and heartwarming novel which celebrates the messiness of ordinary lives and would make a perfect reading group choice. 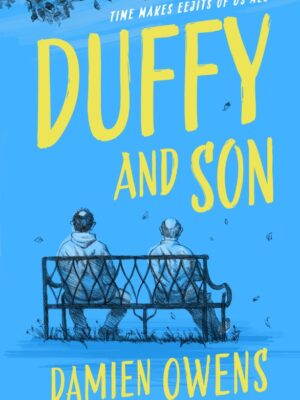