In the near future, America’s worst nightmare has come true. With military
adventurism overseas bogging down the Army and National Guard, the U.S.
government mistakenly neglects the very real threat of anti-establishment
militias scattered across the 50 states. Like a sleeping giant, Middle America
rises up and violently pushes its way to the shining seas, coming to a
standstill at the line in the sand–Manhattan or, as the world now knows it, the
DMZ. In the concluding volume of this Deluxe Edition series, embedded journalist
Matty Roth watches as the Free States of America and the US wage civil war on
the island of Manhattan–also known as the DMZ–with all his allegiances wiped
away. As Matty covers the battles on the ground, old allies and enemies
resurface and Matty must prove that after all he’s been through that he is a
changed man. Will the choices he makes reflect this? And how will New York City
look after it’s all said and done? Brian Wood’s critically acclaimed series DMZ
ends here in this stunning, final chapter. Collects DMZ #45-59. 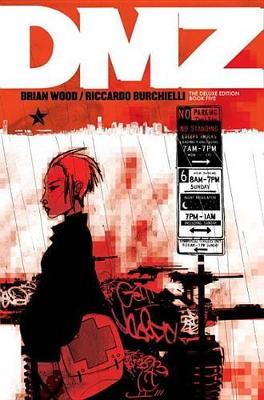