An extraordinary and unique document: Hoess was in charge of the huge extermination camp in Poland where the Nazis murdered some three million Jews, from the time of its creation (he was responsible for building it) in 1940 until late in 1943, by which time the mass exterminations were half completed. Before this he had worked in other concentration camps, and afterwards he was at the Inspectorate in Berlin. He thus knew more, both at first-hand and as an administrator, about Nazi Germany’s greatest crime than did any save two or three other men.

Taken prisoner by the British, he was handed over to the Poles, tried, sentenced to death, and taken back to Auschwitz and there hanged. During the period between his trial and his execution, he was ordered to write his autobiography. This is it.

Hoess repeatedly says he was glad to write the book. He enjoyed the work. And finally the most careful checking has shown that he took great pains to tell the truth. Here we have, painted by his own hand, a vivid and unforgettable self-portrait of one of the great monsters of all time. To this are added portraits of some of his more spectacular fellow-criminals. The royalties from this macabre but historically important book go to the fund set up to help the few survivors from the Auschwitz camps. 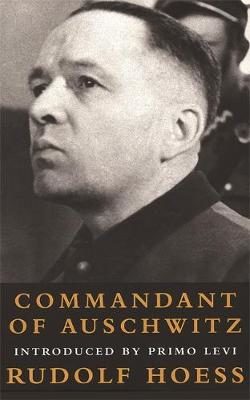