An immersive memoir about a groundbreaking surfing career, and a stunning portrait of Ireland as one of the world’s most captivating big-wave surfing destinations.

Born and raised in Bundoran, with the waves of the west coast of Ireland breaking at his doorstep, Richie Fitzgerald was moulded by his environment – from his initiation to surfing at the age of 9 in the cold Atlantic water to becoming Ireland’s first ever pro surfer and competing on a global scale.

But learning to surf in 1980s Ireland wasn’t without its challenges. With little to no equipment, Richie duct-taped Marigolds over woollen gloves to protect his hands from the freezing water and even melted Christening candles to pour on his board in place of surf wax.

Yet the west of Ireland boasts waves of size and quality to rival those in California and Hawaii, attracting surfers from all over the world who want to test their mettle, and Richie has surfed the biggest, and most dangerous, of them.

Cold-Water Eden is not just a captivating memoir about a transcendent sport: it is at its heart a coming-of-age story about one man’s pursuit of big waves and the dawn of Ireland as a singular destination on the global surf scene. 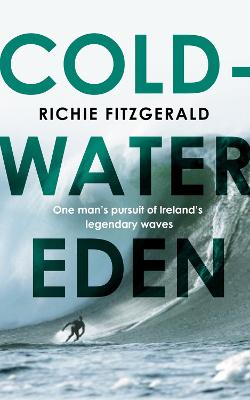