Clash of the Clans: The Rise of the Kinahan Mafia and Boxing’s Dirty Secret

CLASH OF THE CLANS is a story that traces the emergence of the Irish mafia from
the streets of Dublin to the highest echelons of global organised crime and right into
the heart of professional boxing. When a weigh-in turns into a gangland bloodbath,
the tables begin to turn on the powerful Kinahan Organised Crime Group. But is it too
late to tame the beast or can the law finally catch up with the mob?
Bestselling author and award-winning crime journalist Nicola Tallant brings the reader
on her own journey of discovery as she delves into the dangerous underworld where a
golden era of cocaine turned a brat pack of street dealers into an international mafia.
With a unique insight into the rise of mob and its reach into boxing through a tapestry
of confidential informants and some too-close-for-comfort experiences, Tallant brings
to life one of the most extraordinary stories in modern organised crime.
Following the trail from the local authority estates of the Irish capital to the gilded
mansions of Dubai, Clash of the Clans: The Inside Story of the Kinahan-Hutch
Gangland Feud powers through the intriguing tale of the cocaine cowboys and the
rivalries that threaten to bring down an empire. 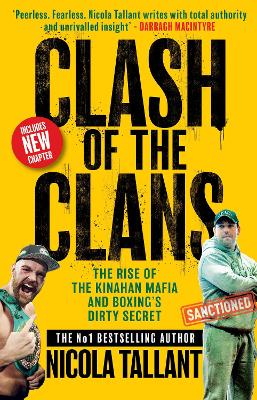 Clash of the Clans: The Rise of the Kinahan Mafia and Boxing’s Dirty Secret
€8.99
This website uses cookies to improve your experience. We'll assume you're ok with this, but you can opt-out if you wish. ACCEPT Reject Read More
Privacy & Cookies Policy