Claimed for the Sheikh’s Shock Son by Carol Marinelli

…has a lifetime of consequences

Desert prince Khalid never loses control… With one exception: his illicit night of passion with captivating dancer Aubrey. Khalid was shocked to discover Aubrey was a virgin.

Yet after returning to his kingdom, nothing compares to the bombshell that she’s had his secret child! Claiming his son is non-negotiable for this proud prince… But claiming Aubrey will prove a much more delicious challenge!

“Marry me this weekend.”

He will wed his Cinderella!

Sicilian billionaire Gabriel Salvetti offers a simple exchange- for her hand in marriage he’ll save Francesca Mancini’s ancestral home. Penniless Frankie has the aristocratic name Gabriel needs to redeem his family’s notorious reputation. And their blatant physical attraction can only sweeten the deal. But when he discovers his convenient bride is a secret virgin, one taste is enough to make Gabriel crave his wife-forever! 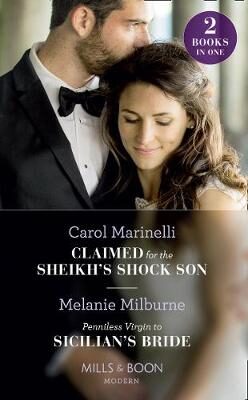 Claimed For The Sheikh’s Shock Son: Claimed for the Sheikh’s Shock Son / Penniless Virgin to Sicilian’s Bride (Mills & Boon Modern)
€3.00
This website uses cookies to improve your experience. We'll assume you're ok with this, but you can opt-out if you wish. ACCEPT Reject Read More
Privacy & Cookies Policy