Belonging: A Memoir of Place, Beginnings and One Woman’s Search for Truth and Justice for the Tuam Babies

When 51-year-old Catherine Corless decided to enroll in an evening course in local history, she had no idea where the decision would lead her. The lecturer encouraged the class to ‘see history all around you’, to ‘dig deeper and ask why’.

It was from these humble beginnings that Catherine began researching the Tuam Mother and Baby Home in County Galway, which she had passed every day as a child on her way to school. Slowly, she began to uncover a dark secret that had been kept for many years: the bodies of 796 babies had been buried in what she believed to be a sewage tank on the grounds. But who were these children, how did they get there and who had been responsible for looking after them?

Determined to ask why, Catherine doggedly set about investigating further. Her quest for justice for the Tuam babies and those who went through that home would span over a decade as, often against fierce resistance, she brought to light a terrible truth that shocked the world, impacted the Vatican, and led to a Commission of Investigation in Ireland.

Part memoir, part detective story, Belonging is both Catherine’s account, and that of those 796 children for whom she came to care so deeply: one of the tender love of a mother and her child; of pain and trauma; of the unforgettable screams which echoed through the corridors as children were taken from their mothers; and of a mystery which continues to this very day, as so many are still left without answers, still searching to know where, and to whom they belong. 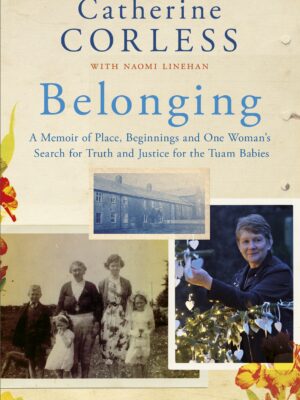 Belonging: A Memoir of Place, Beginnings and One Woman’s Search for Truth and Justice for the Tuam Babies
€7.99
This website uses cookies to improve your experience. We'll assume you're ok with this, but you can opt-out if you wish. ACCEPT Reject Read More
Privacy & Cookies Policy