American Kompromat unravels the Russian-influenced operations that amassed the dirty little secrets of the richest and most powerful men on earth.

American Kompromat is based on extended and exclusive interviews with high-level sources in the KGB, CIA, and FBI, as well as lawyers at white-shoe Washington firms, associates of Jeffrey Epstein, and thousands of pages of FBI reports, police investigations, and news articles in English, Russian, and Ukrainian. A narrative offering jaw-dropping context, and set in Upper East Side mansions and private Caribbean islands, gigantic yachts, and private jets, American Kompromat shows that from Donald Trump to Jeffrey Epstein, Russian operations transformed the darkest secrets of the most powerful people in the world into potent weapons that served its interests.

Among its many revelations, American Kompromat addresses what may be the single most important unanswered question of the entire Trump era – and one that Unger argues is even more important now that Trump is out of office: Was Donald Trump a Russian asset? Just how compromised was he? And how could such an audacious feat have been accomplished? To answer these questions and more, Craig Unger reports, is to understand kompromat – operations that amassed compromising information on the richest and most powerful men on earth, and that leveraged power by appealing to what is, for some, the most prized possession of all: their vanity.

This is a story that transcends the end of the Trump administration, illuminating a major underreported aspect of Trump’s corruption that has profoundly damaged American democracy. 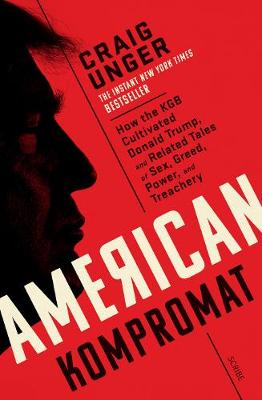