A Woman in Defence: A Soldier’s Story of the Enemy Within the Irish Army

During her 31-year career as a soldier in the Irish Defence Forces, Karina Molloy achieved many firsts. First female to get promoted to Senior Non-Commissioned Officer (NCO) rank. First to attempt the Army Ranger Wing selection course – Ireland’s SAS equivalent – when it was considered impossible for women. And, to date, Karina has the most overseas service as a female senior NCO.

But despite a pioneering career, she faced many setbacks in an institution rife with misogyny – from sexual assault to routine bullying to promotional glass ceilings. And yet she persevered.

From Lebanon to Eritrea to Bosnia, A Woman in Defence is the often shocking story of a determined soldier who forged her way in a man’s world, and who continues to fight to make the army a safer and more equitable place for women. What emerges is a damning exposé of a venerable Irish institution which has failed to defence and protect its own. 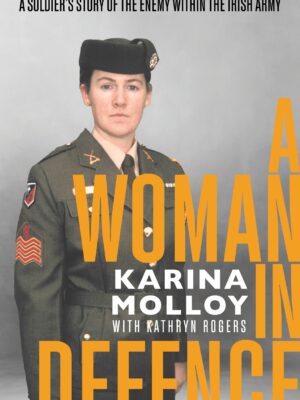 A Woman in Defence: A Soldier’s Story of the Enemy Within the Irish Army
€14.99
This website uses cookies to improve your experience. We'll assume you're ok with this, but you can opt-out if you wish. ACCEPT Reject Read More
Privacy & Cookies Policy