A STORM OF SWORDS: BLOOD AND GOLD is the SECOND part of the third volume in the series.

`Colossal, staggering . . . one of the greats’ SFX

The Starks are scattered.

Robb Stark may be King in the North, but he must bend to the will of the old tyrant Walder Frey if he is to hold his crown. And while his youngest sister, Arya, has escaped the clutches of the depraved Cersei Lannister and her son, the capricious boy-king Joffrey, Sansa Stark remains their captive.

Meanwhile, across the ocean, Daenerys Stormborn, the last heir of the Dragon King, delivers death to the slave-trading cities of Astapor and Yunkai as she approaches Westeros with vengeance in her heart.

Congratulations to Ken Sutton who was the winner of our competition for the new Ireland jersey signed by Rob Kearney. Thank you to everyone who entered the competition, we hope you enjoy your signed copies of the book.
Keep an eye on our page for more competitions in the future. ... See MoreSee Less

Don't forget that this week is Irish Book Week and it is all about celebrating the contribution that Irish books and authors make to Irish culture.
This week make an extra effort to support one of our many wonderful homegrown authors if you're picking up a new book and help continue the tradition of great Irish writing.
We have compiled a list of some of the most popular Irish books this year along with some of the newer releases that you can find here. bit.ly/2FLqRPd ... See MoreSee Less 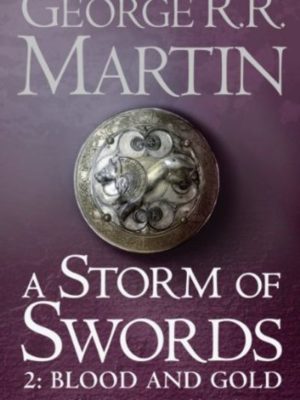 A Storm of Swords: Part 2 Blood and Gold (Reissue) (A Song of Ice and Fire, Book 3)
€8.99
This website uses cookies to improve your experience. We'll assume you're ok with this, but you can opt-out if you wish. ACCEPT Reject Read More
Privacy & Cookies Policy